About one month ago I moved cities within Switzerland. Exciting! Not such a biggie though as a trip to my old “home” is only one hour by train. But, nonetheless, new city (which I love!) = new traditions, or lack thereof. First lack: Herbstmesse. That’s right, there is no Herbstmesse where I now live (SO SAD!!).
For those of you who don’t know Herbstmesse, it’s the Basel autumn fair which last for 2 weeks, spreads across the whole city and is well-known for rides, games and most importantly food. Lots of exciting edible things to indulge in are unique to the Herbstmesse, eg. Beggeschmutz (something like a chocolate covered giant marshmallow), Mässmogge (sugar-candy), Brennti Mandle (caramelised almonds), Biberli (gingerbread like heaven filled with almond paste), Rosekiechli (a thin kind of waffle), Maagebrot (cinnamony/clove/chocolatey bread bites coated in a chocolate/sugar glaze), the list goes on. My personal favorite: Maagebrot. Directly translated it would be called stomach bread…. doesn’t sound too appetising. Honestly, it also doesn’t look appetising. But the combination of the cocoa, cinnamon and cloves in the bread with a thin chocolatey glaze is irresistible.
In an attempt to bring a bit of the autumn fair feeling into my new home I decided to make Maagebrot. To my surprise, it wasn’t even that difficult. As mentioned before, its appearance really isn’t that appetising so sorry for the picture. Try to imagine a christmassy smell, recreate at home and dig in alongside a cup of hot chocolate! 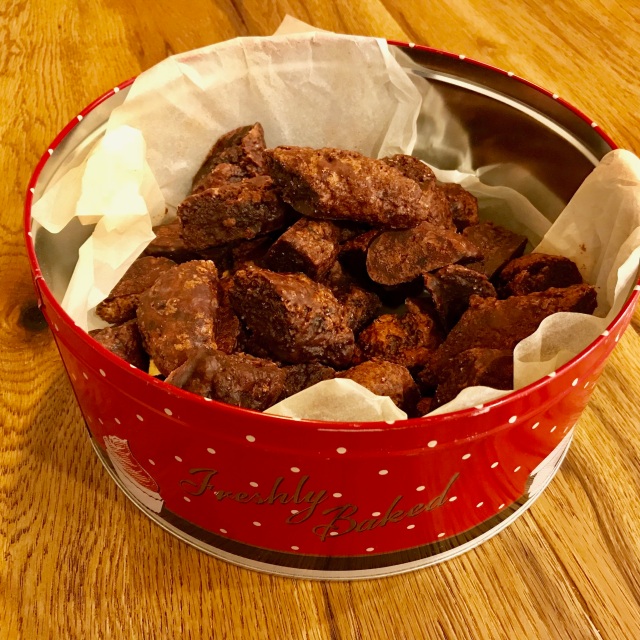 END_OF_DOCUMENT_TOKEN_TO_BE_REPLACED

T-2 days until I am officially unemployed for 2 months! Scary! Anyone have a guide to leading the life of a pensioner?
In my hospital, tradition calls for junior doctors to spoil their co-workers with a sweet breakfast sometime around their last day of work. Another compulsory “cake baking” moment in the life of a junior doctor, respectively surgeon in training, is after being allowed to operate something for the first time. There is an unwritten rule stating one has to bring a cake after each new surgical achievement. Sneaky, sneaky surgeons. Now, instead of always bringing cake, I figured I could be creative and bring rolls. Who doesn’t like rolls? My personal favorite – cinnamon rolls – would be a tad too intense for my Swiss colleagues to digest at 8 am. So I decided to stay on the safe side and made these hazelnut rolls – NOM. Secret ingredient: a hint of cinnamon, obvs.

END_OF_DOCUMENT_TOKEN_TO_BE_REPLACED

Who would have thought a significant link between food and doctors has existed for decades? Granted, food is an essential part of life, is partially responsible for shaping our day and is of course also clearly correlated with health. As food and it’s appearance seem to be something everyone knows about and can relate to, instead of challenging the brain with confusing latin names, the medical world has been kind enough to supply laypersons (and medics) with less technical, descriptive food related, terms. It is great for describing findings! If I told you a manifestation of Kawasaki’s disease and Scarlet Fever is an erythematous tongue with hyperplastic fungiform papillae your brain would probably process this: ?!*?!*?!*?!*?!*. If I told you that basically means the tongue looks like a strawberry, your brain could cope. In 1979 the British Medical Journal published a Review titled: Gastrology: the use of culinary terms in medicine (woopwoop research skills put to excellent use). I even found a blog solely dedicated to this! Anyways, here is a list of a few day brightening medical food terms:

I’m sure you could all picture something under these terms. Today’s recipe is semi-related to the number 26: Butterzopf. It is a Swiss Sunday breakfast classic, made with lots and lots of butter. Lucky for you it doesn’t cause butter stools in the average healthy individual. Definitely a must try for your next Sunday family breakfast!